A Wonderful Group of Dynamic K9s

Dynamic K9s is run by Charlotte Rundgren. Although dogs have always been part of her life, her first love was horses, and it was in the equine field that her ability as an animal trainer first became apparent. She became one of the youngest people to obtain BHSAI qualification of the British Horse Society and trained with top international dressage riders from the UK, Europe and the USA.

After a period of travel, Charlotte settled in the USA and it was there that she first became involved in the sport of agility.

Charlotte was fortunate to be able to train with many internationally respected trainers, including Susan Garrett, Mary Ray, Stuart and Pati Mah whilst developing her own training philosophies.

Since migrating to New Zealand Charlotte has contintued her education and studied online with Susan Garrett, Justine Davenport and Jessica Patterson to develop her handling and dog training skills. She has also enlisted the help of Shari Zelman Sprague and Debbie Gross to develop her fitness programme to keep her dogs, and her student's dogs in top notch condition.

Charlotte competed in the US from 1997 to 1999, attaining the title of USDAA Agility Champion with her Australian Shepherd, Shadow, and achieving top-10 ranking in USDAA (United States Dog Agility Association).

After migrating to New Zealand, Shadow achieved Agility Grand Champion status, thus becoming the only known dog to have become an agility champion in both the northern and southern hemispheres. During her career, Shadow obtained a total of 180 wins in competition. All this from a dog that was hugely fear-aggressive before Charlotte got her at five months old. A couple of years after moving to New Zealand Breenagh Chaos arrived on the scene, she was a very special border collie from Scottish herding lines. Chaos was an incredible dog both on and off the field of agility and also gained her Agility Grand Champion status in New Zealand.

Charlotte’s partner, Ron Frater, has been involved in agility in New Zealand since 1996 and is himself a successful competitor, having achieved the title of agility champion with his Border Collie, Gem. Ron runs his sheltie, Ticket. He is also a senior agility judge. 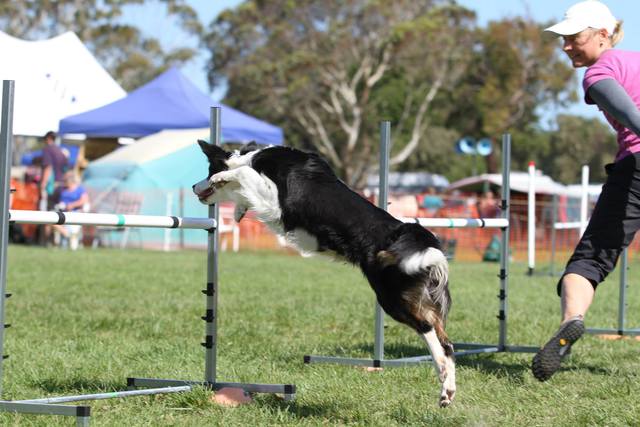 Blaze and Charlotte competing at NZDAC 2013